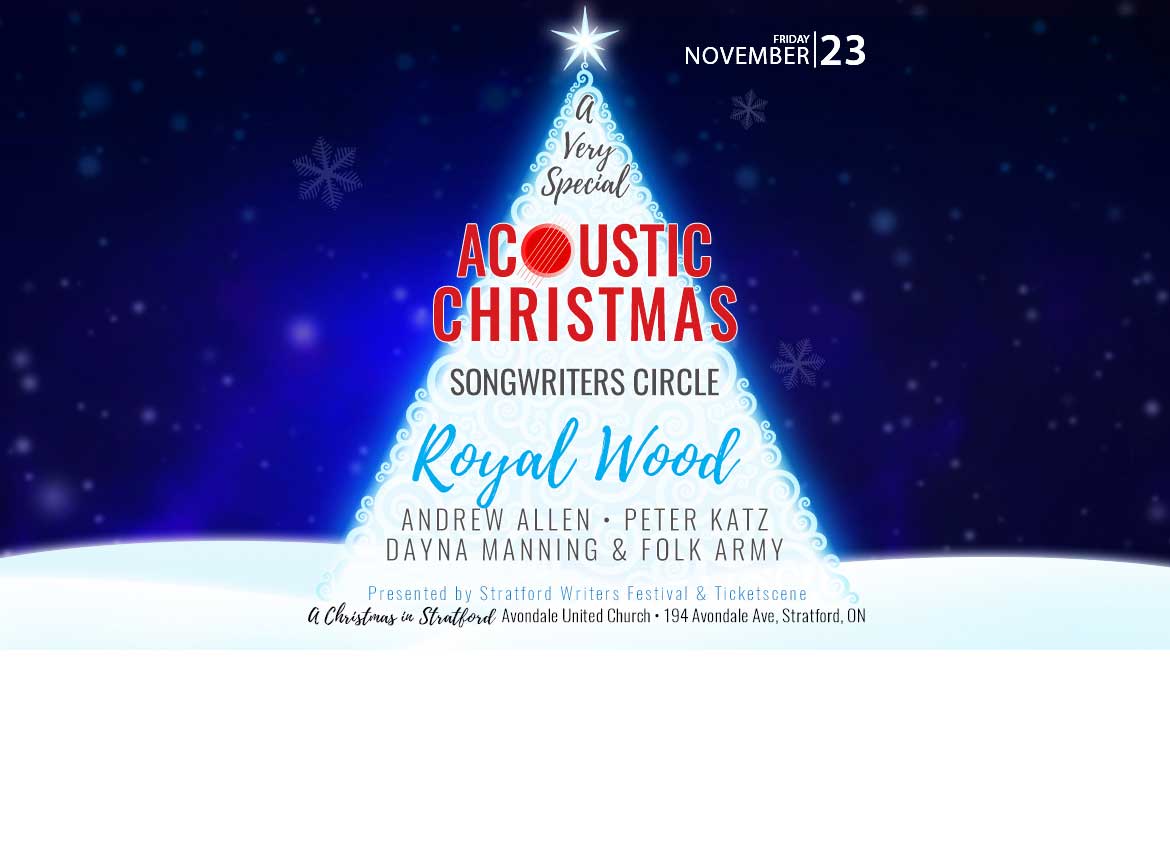 Celebrate the spirit of Christmas with a truly unique musical event that will conjure up your appetite for holiday music and awaken the Christmas spirit in you! This one-of-a-kind Christmas acoustic concert on Friday, November 23, at Stratford’s Avondale Church will feature an all-star line up of some of Canada’s top songwriters such as Juno award-winning artist Royal Wood, Juno nominee Peter Katz, multiple chart-topping artist Andrew Allen, and Dayna Manning (Dayna’s Manning’s Folk Army will be opening).
From the time you arrive at the decked out hall to the moment you take your seat, you’ll be in for a special holiday experience as these talented songwriters perform their favourite Christmas songs and share the stories and memories behind them. The Acoustic Christmas Songwriters’ Circle in Stratford promises to deliver festive surprises that will magically amp up your Christmas spirit!
Tickets go on sale September 28 @ 10am on Ticketscene.ca. Space is limited. Preferred seating will be available along with craft beer and wine for sale.

Canadian singer-songwriter and Juno Award winner Royal Wood’s ninth studio album Ever After The Farewell (2018) has received international acclaim. Royal recorded the album on the Beatles EMI console that made Abbey Road possible. “Every day I walked into the studio in London UK with the ghosts of my musical heroes sitting beside me,” said Royal. “All of my life I wanted to make music with the Beatles, and now I feel like I have,” he joked.

Andrew Allen’s biggest single released in 2010 “Loving You Tonight,” which was lodged in the upper reaches of the charts for more than 22 weeks and broke the US Top 30 while gaining over 4 million views on YouTube. An accomplished songwriter, Allen’s songs can be heard on the Grammy Nominated record, ‘Atmosphere’ by EDM aritst KASKADE ft. Project 46, as well as a song titled ‘DIME’, found on Latin Boy Band CD9’s Gold Selling album, and his QUADRUPLE PLATINUM record ‘Ad Occhi Chiusi’ released by Italy’s Marco Mengoni!

Juno-nominated and Canadian Screen Award-nominated singer-songwriter Peter Katz was recently crowned Best Male Vocalist in the popular NOW Magazine Best-Of-Toronto reader’s poll. He has shared the stage and studio with the likes of Academy Award Winner Glen Hansard (Once, The Swell Season), Juno Award-Winners The Good Lovelies, Polaris-Prize nominated Melissa McCelland (Whitehorse) and the Legendary Garth Hudson from The Band. “One of the most promising songwriters of our time” B.Y.E Magazine Germany